The Pottsville business had hot dogs, bratwurst, chips, pretzels, soda and water available to those who stopped by in front the brewery for its Barbeque at the Brewery event at 501 Mahantongo St.

Yuengling said the event was "something to get people out and enjoy themselves," adding that it was a way to show appreciation for support of the company.

From 11 a.m. to 2 p.m. people ate food, posed for photographs with Yuengling and Tommy Greene, a retired Philadelphia Phillies pitcher, shopped at the gift store, and, in the case of one man, even texted a number for his chance to win a "Little Guy
Trailer."

The trailer will be given away to a Schuylkill County resident in late November or early December, said Rob Schimony, division sales manager for Yuengling. It has room for two people and includes a mini burner in the back, a pullout queen size bed and an electric outlet.

"It's kind of like the ultimate tail gate thing," he said.

No purchase is necessary for the approximate 12 foot by 7 foot, trailer valued at $7,000 and manufactured by an Ohio company. 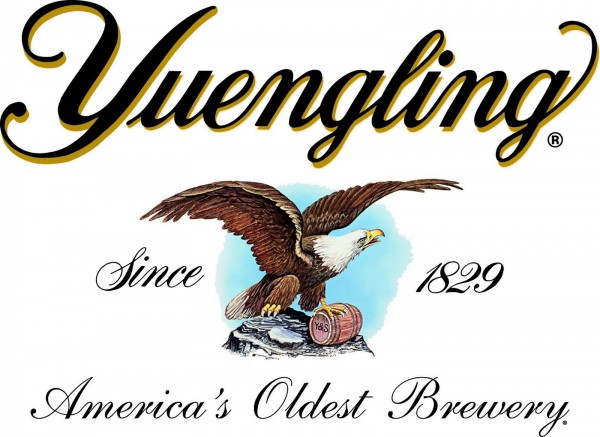 Those who want to try their luck at the trailer may text Lager5 to 74455.

Another trailer will be given away company wide to those who apply later this year.

The food was the event's big draw. It's Just Barbecue, Deer Lake, started cooking at 5 a.m. at the brewery.

"We're just actually boiling the last batch of them (bratwurst) right now," said Jeff Stumpf, a co-owner along with his wife, Rena, as he stood on site.

The bratwurst were boiled in Yuengling Black and Tan beer before they finished cooking on the grill. Onions, peppers and other condiments were available.

Chris Branham, 39, of Wind Gap, Northampton County, was enjoying her day off.

"This is much better than work," she said.

Her husband, Mike Futchko, 42, also enjoyed himself. They both had something to eat and said the food was good.

"He's very approachable and very nice to talk to," he said.

Yuengling autographed a square sign commemorating the brewery's 175th anniversary, posed for photos and signed T-shirts at the event.

Gloria Land had her photo taken with Yuengling.

"I look forward to it every year," he said.

Greene, Philadelphia Phillies pitcher from 1990 to 1995, signed autographs and posed for pictures to show his support for Yuengling.

He grew up in Whiteville, N.C., and said he liked his first visit to Pottsville.

"Nice, small town. I like it. Lots of Phillies fans. That's good," he said.

Anyone who spent $15 could also spin a wheel and win one of six prizes: an eagle tumbler, lager keg bank, khaki golf hat, 175th metal sign, black can koozie or a $5 gift card.